In 1962, Earl Neeser was out in the hills around Goldfield looking for signs of gemstone deposits.  From several miles off he noticed an area with surface disturbance and when he got to the area, he found the original Chalcedony deposit area which he called New Jerusalem.

He filed additional claims for Goldfield Gem Claims 2-4 and later added #5.  According to Earl, many in the Goldfield area thought he was crazy because they were only looking for gold and silver deposits, not gemstones.  Esmeralda County has deposits of turquoise, obsidian, agates, jaspers, crystals, lithium, borax, and many other deposits besides gold and silver.  Earl worked the claims for many years and by 1966 opened them up to rock hounds who would visit the site to pick up their own specimens.  He would have them sign a log sheet which informed them that they take full responsibility for their own actions and would not hold anyone or group liable in case of accidents while on the claim.  There are over 40 pages of logs with visitors to the site from the late 60’s to the early 1970’s showing people who visited and where they were from.

Earl Neeser dba Gem Field, for many years mailed out rock samples and shipped bags, sacks and truckloads of rock to shops all over the US and overseas.  He kept tax and shipping records for these transactions.

In October 1984, Robert W. Ferguson did an article on the Goldfield Gem Claims (Gemfield) that detailed the rocks found and his visit with Earl Neeser.  The article included color pictures of the rocks as well as descriptions of their colors and uses.

Sometime before 1987, Earl Neeser teamed up with Arthur Burton to work the claim and Art ended up with a part interest in the Goldfield Gem claims.

In April 1987   Earl Neeser sold the claims to the Camaldolese Hermits of America, Inc. except for the reserve held by Art Burton.  In May 1989, Georgia and Arthur Burton purchased Goldfield Gem 2-5 from the Monks. [My father Slim Sirnes, gave me a chalcedony stone with an engraved cross made by the Monks]

Arthur F. and Georgia A. Burton obtained an Esmeralda County License and operated Burton’s Goldfield Gems for many years.  In July 1999 Georgia Burton Bowman bought the New Jerusalem Mining Claim (Gemfield Gem 1) from Earl Neeser who had moved to Idaho.

This brought all the claims under one ownership again.  The site continued to be open to rock collectors on the honor system and Georgia had many nice letters (and payments) for rocks collected from the site.  Several Goldfield residents also helped by forwarding money left in the box on site for payment.  In 2006 Georgia Bowman had a stroke and son Steve Bowman (and the rest of the family) started helping with the claims.

In early September 2015, we (Sharon and Nadiah) contacted the Bowman Family and asked about the possibility of buying the Gemfield Claim site.  Georgia Bowman and her family had maintained the site for many years and allowed people to go out and collect rocks and we wanted to do the same.  Like many residents of Goldfield, we have enjoyed going out there and enjoying the peace and tranquility of the area.  Unfortunately, some people have gone out there and dumped trash and destroyed the old trailers that were on site.  We felt we could better maintain the site since I live in Goldfield and could see it from town.  After working out details and filing papers with Esmeralda County and the BLM in Reno, Gemfield Gem claims became ours at the end of September 2015.  Steve Bowman has given us many documents and materials regarding the site which we will be digitalizing and putting on computer, and people are more than welcome to view these records of past visitors.

Sources – Stories told by Earl Neeser to Slim Sirnes and other visitors to the Gemfield Gem claims as well as information provided by Georgia Burton Bowman and her son Steve Bowman.

The following information was originally printed as a handout provided by Art and Georgia Burton on the Goldfield Gem mines. 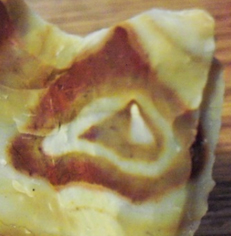 The Rainbow Colors of Chalcedony Gemstone

CHALCEDONY, a smooth fine-grained variety of native silica (quartz), occurs in a wide variety of forms, Jasper, Carnelian, Onyx, Sardonyx and others. Since prehistoric times, it has been prized for its hardness and beauty. Primitive people fashioned from it implements and weapons as well as ornaments.

CHALCEDONY occupies a place among the stones of the Bible. Among the twelve stones, representing the twelve children of Israel, which were set in the breastplate of the High Priest (Exodus 28), are found five of six forms of CHALCEDONY. It is present in a similar abundance among the foundation stones of the new heavenly city Jerusalem, near the end of the book of Revelation (Chapter 21, verse 19.)

This Gemfield deposit is probably the largest mass of colored gemstone quality CHALCEDONY in the United States and includes many different colors and patterns of the stone. The material is of consistent 7-1/2 hardness and takes a superb polish.

CHALCEDONY occurring in concretionalry, mammillated or stalactitic forms of waxy luster in a great variety of colors, usually bluish white, green, gray, yellow or brown. It has compact fibrous structure and a fine splintery fracture. On a 35 degree angle it will fracture or cut by hitting a piece of stone without a saw.

Hollow nodules of CHALCEDONY containing water and an air bubble, which is visible through the semi-transparent wall, have been found. In all ages CHALCEDONY has been the stone most used by the gem engraver, in many colored varieties, described under special headings, and are still cut and polished as ornamental stones, cabs, bookends, rings, necklaces and other jewelry.

Variegated CHALCEDONY from Goldfield Nevada mines come in many patterns: Bulls eye, parallel waves, dendritic, picture stones and solid colors. CHACEDONY takes a high polish and is ideal for Jewelry and for tumbling.

This is a BLM Lode claim and per BLM requirements, only picks, shovels and other hand tools are allowed.
No mechanical equipment.

NOTE: Although these claims are on BLM property, the rocks, minerals and other materials are claimed property and MAY NOT be collected without permission. This permission is granted by visitors signing the visitor log which is also a release of liability. Signing the Visitor Logs and Payments can be made at the locations below….

Material collection is on the Honor system.  This means you may collect as many specimens as you like, estimate the weight to the nearest pound at $1/lb then either mail payment in (checks made to Goldfield Art & BS or Paypal to goldfieldart@yahoo.com) or drop it off at one of the above businesses.

Discounts are available for Rock Clubs and for larger volumes of rock.  If you provide a mailing or email address we will send you a receipt for your payment and at your request, send you area event information.

These payments help us to provide signs to the site, maintenance and upkeep on the site, information and handouts on the rocks and other minerals to be found on site and to obtain permits from the BLM to open up additional areas for collecting.

Visitors are required to stay away from fenced off areas as these are old mine sites.  Keep your vehicles on the roads provided and since plenty of parking has been provided, please do not block the roads.  There are wild donkeys, horses, antelope, lizards, rattlesnakes, tarantulas and many other animals and reptiles in the area so please fill in any holes you make and use caution when visiting.  Also please remove all trash when you leave. 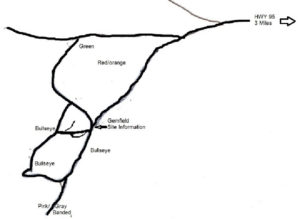 The Gemfield Site is Under Surveillance